Following Super Saturday, last weekend, the McDonald’s Nottingham Hoods went one better to record a significant milestone in the club’s history with u12 Minis, u14, u16, u18, Hoods II and Hoods Senior Men all winning with the Minis being crowned County Champions.

Once again, it was the McDonald’s Nottingham Junior Hoods 14s (4&14) who got the run going, travelling to Leeds Force (7&11), whom they’d beaten at home just two weeks ago. A close game, with the lead changing hands several times, saw the u14s pick up their 3rd win in 4 games and finish the season on a very good run of form, 48-50. They will take huge confidence from how they finished the year and will work hard over the post-season as they prepare for another season in the Premiership. 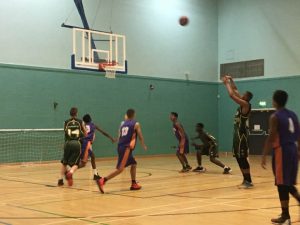 The u16 and u18 teams both journeyed to nearby Leicester to do battle with the Warriors and both teams earned significant wins . McDonald’s Nottingham Junior Hoods u16 (14&2) guaranteed at least 2nd place in the league with a 53-58 victory over Leicester Warriors (10&6) meaning they had a nervous wait for Sunday when their rivals Leicester Dynamite (15&1) played the same team. Dynamite went on to win that game, meaning they would be crowned league champions by a single point, but Hoods can be very proud of their runner-up finish in only their second season and can now look forward to the play-offs as the first Hoods Junior team to have a shout at a National Championship. 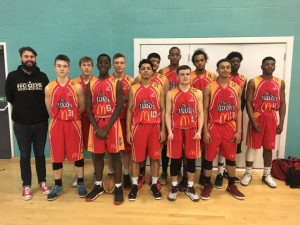 McDonald’s Nottingham Junior Hoods u18 (10&12) had probably the hardest task of the weekend as they took on a Leicester Warriors (16&4) side looking to wrap up the league title, but it was the Hoods who spoiled the party, running out comfortable 79-88 winners and a top half final league position.

On Saturday night, McDonald’s Nottingham Hoods (10&11) faced off with a Doncaster Danum Eagles (6&14) side fighting for survival in one of the most tightly contested Division 2 seasons ever. Having confirmed a spot in the play-offs last weekend, the Hoods were also fighting to earn as high a rank as possible to give them the best opportunity of progression. The Hoods lead the whole game hitting big shots and controlling the tempo throughout, finishing clear 73-58 winners, with the Powell’s 28, Watts’ 14 and Wright’s 10 proving important. The Hoods will now finish 5th or 6th, meaning next weekend’s visit of 3rd place Kent Crusaders (16&3) could be a dry run for the play-off quarter-finals. It is not necessarily as simple as that though, with the top 3 teams in the league separated by just 4 points, with Kent having this game against the Hoods in hand. The game tips-off at 7pm on Saturday 18th March at the Nottingham Wildcats Arena, Greenwood Road, Bakersfield. NG3 7EB. The game is bound to be another sell-out as the last game of the regular season so come early.

For their final match of the season the McDonald’s Nottingham Hoods II finished their season on a high with a 13 point victory over local rivals, Derby Trailblazers II 72-85. Top Scorers in this one were Katona 20, Williams 13 and Enkuzens 13. The win lifts the Hoods above Trailblazers to 6th in the final league standings.

The highlight of the weekend also came on Sunday, when the Hoods u12 Minis were crowned County Champions! Coming close 3 years running but without success the mighty mini team were undefeated all season. Watch out in the future for these shining stars as some of these Nottingham youngsters will be rocking the divisions of the National League for years to come! 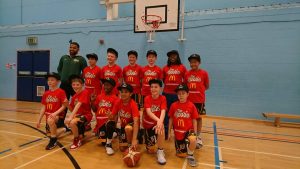 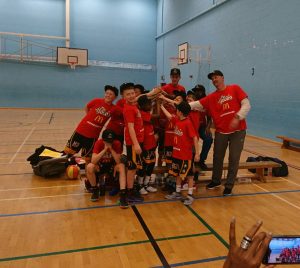