From the word go, the Hoods struggled to make the shots sink in a cold East Midlands derby as they missed their first two opportunities. Luckily in the 1st quarter, Warriors were missing their shots too, but two missed dunks from the Hoods summed up how the afternoon was going to play out as they trailed 19-10 at the end of the 1st.

The second quarter was more of the same as Hoods struggled to finish, this time missing their first 5 shots, before a Maher 2 finally sunk. Warriros were in early foul trouble, but the shooting woes continued even from the line as the usually accurate Hoods players missed 13 free throws over the course of the contest. Despite all the woes, a steal by Welle and great pass from Wright sent Slavic thundering through for the dunk, only for Warriors to quell the momentum answering back immediately with a 3. More missed lay-ups and the Warriors had extended their lead 39-25 at the half.

The usual strong 3rd quarter from the Hoods started with a 3 and a block from Warriors as they extended their lead to 22, just 2 minutes in. A time-out by Coach Westley re-focussed the guys as Welle started to take control hitting 5 straight, but Warriors were able to hit key shots when they needed. With 1.30 left in the 3rd, Hoods hit their 1st 3-pointer of the game, through Wright and the lead was down to 14. Another Wright 3 had the Hoods only 13 down with 10 to play, 60-47.

The final quarter was a tense affair as Hoods finally started to find some form, cutting into the lead to be only 8 down mid-way through the quarter, but Warriors were able to answer with a 3 when they needed it most, hitting two in a row to all but finish the game off. Further 3s from Wright, James and Mitchell had the Hoods within 7, but there wasn’t enough time to complete the comeback as Warriors finished the game off from the line to take the 87-80 win.

Coach Westley was left frustrated after the game, “we weren’t good enough on the day. We couldn’t match Leicester’s intensity and they swept us away at vital times. I’ve got to take responsibility myself as coach and re-evaluate how we can move forward over Christmas.” 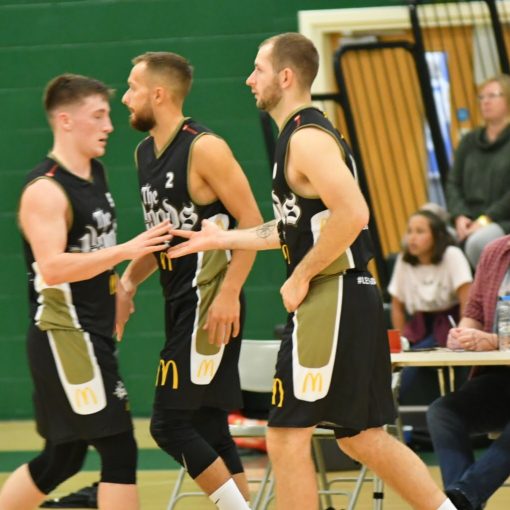