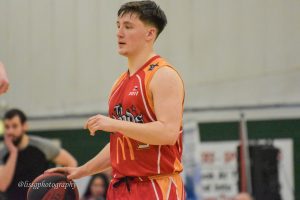 The Nottingham McDonald’s Hoods made the short trip to local rivals, Derby Trailblazers on Saturday and came up with an impressive 91-102 victory.

The home team Trailblazers came out of the blocks quickly as Wilford and Smith got the scoreboard rolling early on to take a 15-5 lead midway through the quarter. A timeout by Coach Westley calmed his troops down and Welle got on the board followed by a massive dunk by Slavic as the Hoods started to focus a little more. Powell, in his first game back from injury, showed what the Hoods had been missing as he started catching fire, scoring in a variety of ways. A Mitchell 3 and the Hoods were right back in the game, 21-20 with 2 minutes remaining.  A timeout from Trailblazers was needed, but it was Watts that hit the first shot out of it, a 3, and the Hoods had the lead for the first time in the game. 9 points in the last minute as Powell hit a 3 of his own soon after, followed by back-to-back 3s from Watts and the Hoods had turned the game upside down and held a healthy 23-34 lead at the end of the 1st quarter.

In the 2nd, Watts came out still firing, hitting back-to-back 3s again to stretch the Hoods lead. However despite the solid team defense Trailblazers were making very tough shots and got the lead back down to 8 points mid-way through. Welle was dominating the defensive boards and playing great defence ensuring nothing came easy for the hosts. Slavic was working hard on the offensive boards, picking up 3 in a row before losing control of the ball. A technical foul on Trailblazers was converted by Watts, with Welle hitting the free throws before a block at the defensive end by Welle led to a fast break and a great assist from Williams on the buzzer sent Welle crashing down the exclamation dunk and Hoods had a 44-60 lead at halftime.

Trailblazers hit a 3 to start the 3rd quarter but two more Watts 3s had Hoods lead up to 20, with 6.58 remaining. Trailblazers then started their comeback and fought hard as the Hoods struggled to control Wilford and Smith in transition play. Scores from Ballentine, Mitchell and Powell steadied the ship to ensure the Hoods kept a lead going into the final 10 minutes, 68-81.

The 4th quarter was an even affair with the teams trading baskets. Trailblazers got the lead down to 9 with just over 3 minutes remaining, but the Hoods kept their composure and a timely steal from the excellent Mitchell sealed the game.

Coach Westley commented after the game, “Great execution in the 1st half but more pleasing was the fighting spirit and level heads in the 2nd half. We showed some great potential today.”

Guard Luke Mitchell added, “We knew it was a big game and a chance to make a statement. It was our first game of the season with a full healthy team, so we wanted to show what we’re capable of and I think we did that. Everyone was switched on and carried out their assigned role to the best of their ability. It was great to come away with a such a good result against our local rivals. Cole (Welle) had a great game in front of his dad, who was over from America to watch him play in England for the first time.”

The Nottingham Hoods started the 2013/14 season in the worst possible fashion with a dissapointing loss at home to Stockport Falcons 59-78. […] 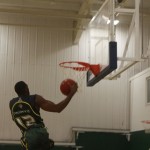 Following the great win against top of the table, Solent Kestrels, on Saturday night this game against bottom team Eastside Eagles was […] 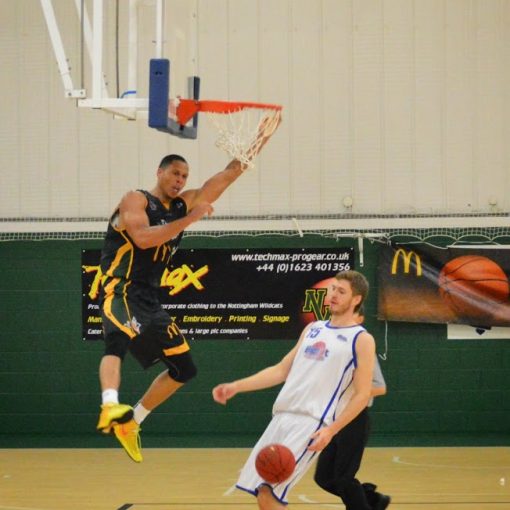 The McDonald’s Nottingham Hoods Basketball Club had an easy game on Saturday as they lit up Leeds 49-98, and broke the winning […]