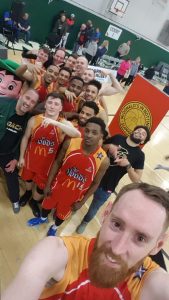 The McDonald’s Nottingham Hoods have achieved promotion to Division 1 on the back of a hard fought 102-85 victory over rivals Essex Leopards.

The journey started 9 years ago when GM Lee English wanted to bring a National League programme back to Nottingham and called on local players and friends to form a team with the aim of helping youngsters get off the streets and getting active. Winning the National Championship in 2010 was just the beginning as the club went from strength to strength, adding two more men’s teams, a university programme and a full junior national league programme culminating in last night’s victory which guaranteed them a top 2 finish in Division 2 and therefore promotion to Division 1.

With a full day of action and all 6 Hoods teams at home, the crowds packed into the Nottingham Wildcats Arena early and even before the teams took to the court for warmup, emergency seats were being brought in to accommodate everyone.

Slavic got off to a fine start, with a nice hook shot from the post, followed  immediately by a two handed dunk before a huge block on the defensive end, but Leopards showed why they were in Division 1 last season finding their range and hitting 3s to stay close. Three 3s in a row from Mitchell pushed the lead to 17-11 for the Hoods and when Powell intercepted a pass and went full court for the dunk, Leopards were forced into a time-out trailing 24-16. The game was being played at a frantic pace, with Leopards still hitting long range shots, before American import, Robinson took over with a 3 of his own followed by a couple of dunks as the noise level increased in the arena. The first quarter finishing 33-22.

Leopards came back firing in the second with three 3s in a row forcing Coach Westley into a time-out. Another 3 out of that and a foul in the act of shooting suddenly quietened the crowd as Leopards took the lead for the first time in the game 37-39. Things then went from bad to worse as rebounding machine, Ballentine, took a nasty knock to the knee and  would not return. Westley took advantage of the referee time out to calm his players down to great effect as Powell took over with and and-one play, followed by a 3. More jump shots from Powell and a dunk from Robinson to finish the half and the Hoods had reclaimed the lead and were pushing on 59-46.

The third quarter saw a more relaxed Hoods team start to enjoy the moment, moving the ball beautifully round the players, finding the open man on offence coupled with huge defensive pressure not least than from Casimiro. More defensive stops and forced turnovers culminated in Watts converting an and-one and in a blink of an eye Hoods had leapt into a 72-49 lead and seemingly cruising. An off the backboard rebound dunk from Smith pushed the lead further to huge delight from the crowd, but a brief lapse in concentration allowed Leopards to make some open shots and a tip-in at the buzzer by Leopards reduced the lead 83-69.

Starting the 4th, Leopards started forcing the play to great effect and clearly had the Hoods riled as a technical foul followed more impressive outside shooting and the lead was down top 7, 83-76. A double technical this time against both teams for an off the ball incident as tempers flared between these two highly competitive and talented teams got the nerves in the crowd growing but seemed to inspire the Hoods. Another block from Slavic before Watts pinned a ball on the backboard for a block and the Hoods had crept away again 90-78 with 3.51 remaining. Leopards outside shooting was still a threat but a great feed from Mitchell found Watts free under the basket, which the veteran finished before sinking back-to-back pressure 3s and the game was nearly over. More aggressive defence from the Hoods and the noise in the arena was deafening as the Hoods were closing in on an historic victory. There was time for one more Robinson slam dunk and the Hoods had won, securing promotion to Division 1 for the first time and are now just 2 wins away from a first ever league title.

Top Scorers on the day were Powell 28, Watts 27 and Robinson 21 but it was very much a team effort as every member of the team was influential in the victory.

GM Lee English paid credit to his staff, “9 years and 4 divisions, we’ll take that. This journey has been incredible but this is just the start, we have an amazing team behind the scenes that don’t get the credit they deserve for the hard work and dedication it has taken to get to this level and I can never thank them enough”

Club Captain and 2 time MVP Bruce Lauder added, “what an amazing atmosphere for these guys to play in. Lee promised me we would achieve this and today we have. The succes belongs to every player, coach, volunteer and of course all our Merry Men. I’m exhausted, that game needed to be won. Credit to Leopards, they are a heck of a team and lethal from outside. They will be a force in the play-offs but tonight belongs to Coach Westley and his players.” 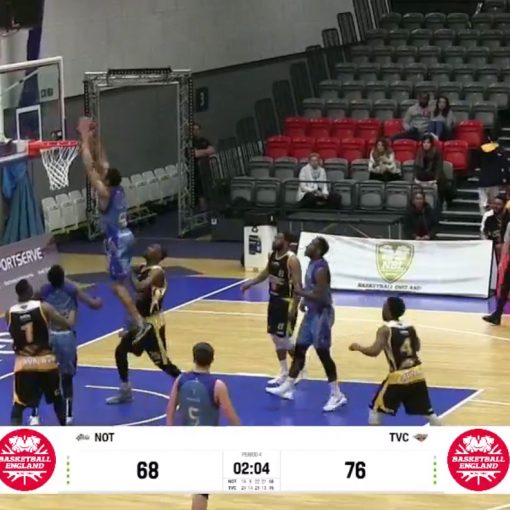