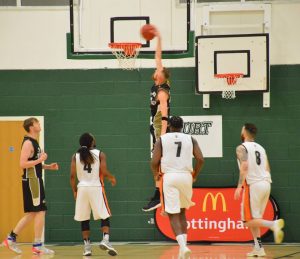 Nottingham McDonald’s Hoods will have to wait on other results to see if they qualify for the Trophy Semi-final after two very different results at the weekend.

Inspired by their home crowd, Hoods came out firing and quickly built up and 8-0 lead through great defensive intensity and ball movement on offence. With a little under 5 minutes remaining, Euan James came into the game and Luke Mitchell found him on the break with the perfect alley-oop pass for James to hammer home on the defenders below him with his first touch of the ball – much to the crowd’s enjoyment. At the end of the 1st Quarter, the Hoods had a healthy 17-7 lead.

The defensive intensity continued in the 2nd Quarter and Hoods started to find their range from downtown, with new signing Eddie Brownell hitting his first points at home, before Kieran Wright hit a 3 of his own straight after to stretch the lead to 28-15. However, the Hoods had a lapse in concentration over the next two minutes, which allowed Warriors back into the game as they went on their own run to bring the score back to within 6. A timeout by Coach Westley saw Watts on the line coming out of it, he hit both and Hoods re-discovered their composure on defence, which led to a strong run on offence as they pushed the lead back up to 40-28 at halftime.

The 3rd Quarter started with a huge dunk for Warriors but then the guards started to catch fire as first Watts, then Powell, then James with back-to-back threes put Hoods in complete control 69-40. Ballentine was making a nuisance of himself at the defensive end and found Powell on the break for another 3 and Hoods closed the quarter out, following an intentional foul on Wright, 73-44.

James, who incredibly did not miss a shot from the field, the 3-point line or the free throw line on his way to 13 points, threw a great fake before driving to the basket, getting fouled, hitting the free-throw and then sat down having extended the Hoods lead to 79-46 to huge applause from the fans. More three-point shots from Wright and Williams, a couple of dunks from Watts and the game was done, 96-67.

Coach Westley commented, “the guys had great execution and were assertive and aggressive whilst showing good composure when needed.”

On Sunday, Hoods faced the daunting task of last season’s champions Loughborough Riders, in Loughborough, smarting from losing the night before to Derby Trailblazers. A win for the Hoods would have guaranteed top spot in the Trophy Pool and a place in the semi-final, but it wasn’t to be.

The game started well enough, with Powell on a mission, scoring the first 6 points and picking up an assist on the other two baskets, but Riders clawed their way back to tie the game mid-way through the quarter at 10-10. Riders, then took the initiative and sneaked ahead 16-12, before Hoods went on a run themselves to seize the initiative at the end of the 1st Quarter and lead it 18-22, with Powell having a very impressive stat line of 10 points, 3 rebounds, 2 assists and 1 steal.

The 2nd Quarter was much the same and a very tight affair, with the lead changing hands on several occasions. The long-range touch that had served Hoods so well the night before seemed lacking away from home, which allowed Riders to have a 42-27 lead at halftime.

Disaster then struck for the Hoods in the 3rd Quarter as Riders came out of the break on fire, limiting Hoods shots and finishing their chances to storm to a 70-48 lead with 10 minutes remaining.

In the final quarter, Hoods battled hard, but the damage had already been done and Riders claimed the win 90-63 and now just need to defeat Leicester Warriors to progress.

After a tough weekend, Coach Westley was full of praise for his men and his opposition, “We ran out of steam a little after a great 1st half of basketball and a team like Riders will capitalise on every error we make. Credit to the players and Coach Jarram for recovering from the loss at Derby on Saturday and putting on such a strong show today. The lads fought to the end and played some good basketball at times. We have already discussed the results and are looking forward to practice this week, ready for our league debut at Bradford.” 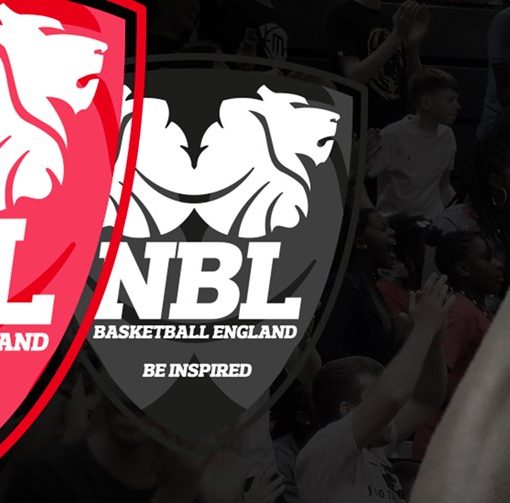 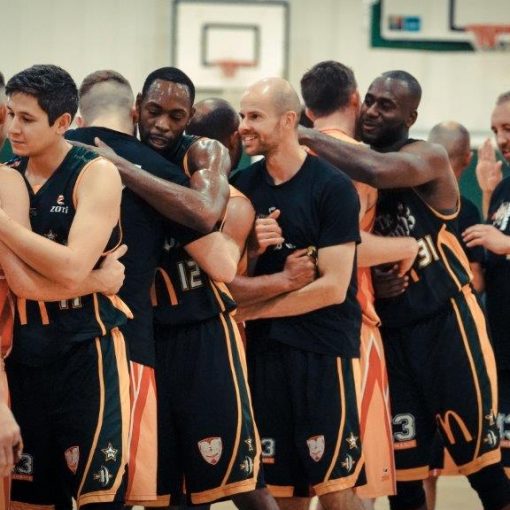 After a long summer break, the Nottingham McDonald’s Hoods are back in Division 1 action this weekend with a tough double header.