The Hoods faced Loughborough Riders on Saturday in the first game back from the Christmas break.  Riders were missing starter Victor Ndoukou due to an ankle injury and new signing Evan Walshe was not yet registered, while Hoods would not have Diogo Soares.

Both Teams would come out of the gates at pace, pushing the ball and looking to score in transition.  8 Straight points from Joshua Guddemi including a pair of 3s would give Hoods the early lead 8-5.  Loughborough would answer with three 3 pointers of their own however and pushed the ball in transition.  A frenetic first quarter would lead to a 26-25  Riders lead, Kyle Jimenez converting a tough and 1 play on the buzzer to keep the game close.

Nottingham’s second quarter response was to come out more aggressively on defence, wracking up steals and converting them at the other end.  Andrew Vickers knocked down 3 of his 4 3 pointers in the quarter, while Johde Campbell converted effectively in transition finishing with 14 points in the period.  Hoods would go into the break with a 15 point lead.

The 2nd half saw Hoods start well increasing their lead, but a stand from Loughborough would bring them back into the game.  A back and forth third quarter led to a Loughborough run in the final period, zone defence stifling Hoods offence and bringing the game back within 6 points.  Key 3 pointers from Andrew Vickers and Kyle Jimenez allowed Hoods to regain control, but Loughborough kept pressure on through Harrison Gamble and his hot shooting, as well as Greg Wild’s strong drives to the basket.  Down 8 with limited time Loughborough were unable to claw back into the game as Hoods made all their free throws down the stretch.

Coach Stanley was critical of his team post game;

“We need to execute better on both ends of the floor, especially defensively, and with far more consistency.  Loughborough are a very solid outfit and they could have easily taken the lead in the fourth with the kind of shots we were giving them, they were unlucky not to hit more of them.  That being said, when we execute correctly and we’re focused I think we look very good, but to compete with the top teams in the league we need to do that for 40 minutes.”

Hoods are back in action next week on Saturday vs Essex Rebels at 3pm, and Sunday vs Oaklands Wolves at 3pm.  Tickets available on the Groubook app, download it now for great deals! 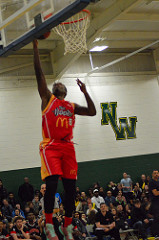