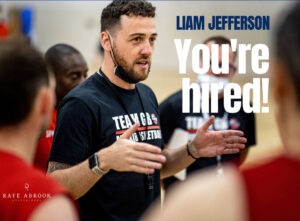 We are very proud to announce that ex-Hoods player, Liam Jefferson has been named head coach for the Team GB Maxibasketball +35 age group.

Liam, the 76th Hood, played during the 2016/17 season in Division 2 before moving on to great success as assistant coach with local rivals Loughborough Riders.
The Team GB Maxibasketball squads have had various camps over recent months, with a host of ex-Hoods players involved in the +40 category, as they prepare for the FIMBA European Maxibasketball Championships in Malaga, Spain next summer.
On hearing news of his appointment, Liam said: “I am extremely grateful to be appointed Head Coach for the Team GB Maxibasketball 35+ team. Across the programme we’re building some very talented, high-character teams that make it such an exciting time to be involved. I’m looking forward to the opportunity to lead the 35+ age group into the FIMBA European Championships next summer and firmly believe we can compete with some of the best across the continent.”
Huge congratulations for the Hoods family, Liam!
#letsgohoods
Photographic credit: Rafe Abrook Photography and Team GB Maxibasketball

Players from the Nottingham Hoods were on hand to help the many runners in the Robin Hood Half Marathon this weekend.

The McDonald’s Nottingham Hoods are back in National League action this weekend against top of the table, Birmingham Mets.