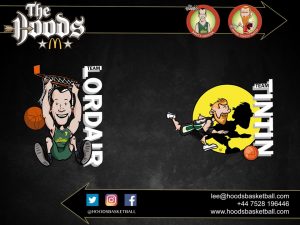 Following yesterday’s starter announcement, the Nottingham McDonald’s Hoods are delighted to announce the full list of players for this Sunday’s Charity game.

Taking place at 12pm on Sunday 22nd September at the Nottingham Wildcats Arena, Greenwood Rd, NG3 7EB, 10 years of Hoods players past and present will be the main attraction of a fun filled 3 hours as the Hoods aim to raise as much money for Alzheimer’s Society, a cause very close to a lot of the players’ hearts.

9 MVPs, 2 Internationals, countless national titles and some key members of the Hoods 10 year journey will be on display.

Joining starters, Bruce Lauder, Simon Allaway, Kirk Davis, Gary Collins and Lucsaz Siczek on Team Lordair will be General Manager Lee English, 2013 MVP Aaron Maher, 2015 MVP Danny Wong, 2016 MVP and record holder for most assists in a game (10) and most assists per game (4.5) Kieran Wright. They will be backed up by key players, Alex Burrows, Liam Kelly and Stephen Thompson.

Bruce “Lordair” Lauder said of his selection, “Now I look at it written down, I’ve certainly gone “old school” with my squad but all of these guys have had a massive impact on me as a player and on the club as a whole. In fact, my wife even taught a couple of them, which really shows my age! I’m excited to get back on court with them, the passion they showed throughout their Hoods careers is incredible and I’m so proud of their response to this event and raising money for such a good cause.”

With David Watts, Delaney Powell, Luke Mitchell, Tarryn Algar and Andrew Wilding on Team Tintin will be Head Coach Ryan Westley, another member of the 2018 Division 2 victorious team, Curtis Williams, original Hoods player and star, Kallum Dunn and 2nd team MVP Ian Poynton, who also helped enormously off the court during his time at the club as well. Chris Hanbury, Liam Jefferson and Tom Wade all played key roles in their relevant seasons with the club and have all supported the club off the court in one way or another.

David “Tintin” Watts commented, “I can’t wait to get back on court with these guys. I’ve known them for most of my playing career. That starting 5 is a group of good players and great friends that have volunteered their time and I am really looking forward to raising as much money as possible for Alzheimer’s Society.”

To celebrate the Nottingham Hoods turning 10 years old, following their debut season in 2009/2010, they have released a new logo for […]

The Nottingham Hoods are delighted to announce that human highlight reel, Victor Olarerin is returning to the Hoods for the 2021/22 season. […]

Following its launch in 2015, the McDonald’s Nottingham Hoods Wheelchair Basketball are hosting an open evening on Wednesday 24th February at Harvey […]