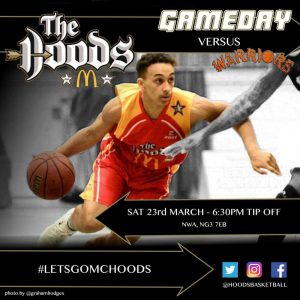 The Nottingham McDonald’s Hoods will be looking to put their current poor run of form behind them as they take on a rejuvenated Leicester Warriors team at 6.30pm at the Nottingham Wildcats Arena.

In a quiet weekend of National League action for the Hoods, the Division 1 team are the only team in action and they will be fully focused on the job in hand. On a 5 game losing streak, the Hoods have seen their playoff aspirations take a major hit, whereas Warriors have won 3 of their last 5 to leapfrog Hoods into the 8th and final playoff position. With just 3 games left, a win on Saturday for the Hoods keeps them with a very realistic chance of making the playoffs, a loss would see them miss out. The teams have met twice this season, with Hoods taking an easy 96-67 victory in the National Trophy Group games, before Warriors snuck an 87-80 win in the league in December.

It promises to be a close game between these two local rivals so our Merry Men are recommended to get there early. Tickets for the game are available on the door and priced at £5 for adults and £2.50 for Juniors, but u12s can enter for free by following Hoods on Instagram by clicking here.

We are excited about the re-start of our West Bridgford Hoods Basketball Session on Monday evenings. Training at Becket School is open […]