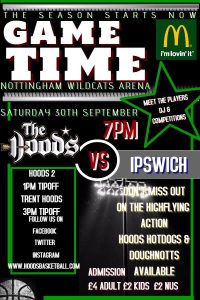 The action starts at 1pm when the Nottingham Hoods II developmental side take on Warwickshire Hawks quickly followed by the newly formed Nottingham Trent University Hoods at 3pm, as they take on Shropshire Warriors.

The main event tips off at 7pm as the Hoods take on Ipswich for a place in the Patron’s Cup semi-final. Hoods beat Essex Leopards in the first game, before they bounced back to beat Ipswich last weekend so it is all to play for. A Hoods win will see them through, a loss and it will come down to points difference. Ipswich are in a re-building season but have a huge amount of local young talent as well as some very experienced players and they are always well coached and drilled so it promises to be a firecracker of an opening home fixture.

All games are at the Nottingham Wildcats Arena.

Elsewhere, there was good news on Thursday for Junior Hoods u16 as they progressed to the National Cup 2nd round as local rivals Notts Nova were forced to forfeit.

We are so excited to get our Junior programmes back up and running, with a new session at Djanogly City Academy starting […]