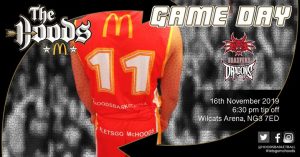 With perhaps the opposite record to what they were expecting at the start of October, the Nottingham McDonald’s Hoods are yet to put their talented puzzle pieces together, but are looking to bounce back at home this Saturday as they take on Bradford Dragons.
Sliding towards the bottom of the table with a 1-6 (0-3 home) record, Hoods are coming off a 37 point battering in front of a disappointed home crowd of Merry Men. Albeit the loss was to the ever so capable Zaire Taylor led Worthing Thunder, it was more so the way the Hoods almost gifted the Thunder such an insurmountable lead early on in the game. The group dropped their heads and eventually walked off the court at full time with tails between their legs, a forgettable performance for almost all involved. Emerging young superstar Victor Olererin was a shining light with 24 points on an otherwise dismal Sunday.
The huge positive to take was the reaction in the locker room immediately after the game and throughout the early training week, the group collectively vowed to never allow such a performance again. The Hoods home court is usually a fortress, as the Merry Men spur the Hoods on, going 13months unbeaten at home just a couple of seasons ago. This season’s home performances have been tough on the whole club, but individually none more so than Australian Tom Atkinson. On the road he averages an impressive 17.25 points, 8.25 rebounds and 2.25 assists while shooting 59%. In contrast he averages a measly 3 points, 2 rebounds and 0.33 assists on 30% at home.
“Obviously basketball, like any other sport, is just as mentally demanding as it is physically,” Atkinson explained. “We are all doing everything we can off the court to become a more cohesive unit and we are all rediscovering our confidence levels one way or another at practice, the way we go at each other during the week is immensely different to what we produced last Sunday. We are going into our clash with Bradford this weekend full well knowing we will be turning things around for our fans regardless of whether we win or lose.”
The Hoods were somewhat derailed at the start of the season by Malachi Nelson’s serious ankle injury, and the more recent absence of the two most experienced players on the squad Matt Ward-Hibbert and Delaney Powell hasn’t helped. Atkinson reiterates the importance of the trio. “Malachi, he is that glue guy you need on every squad. He was the first teammate I met when I arrived in Nottingham and he brings a completely different dynamic to the squad when he’s around, much like when Victor rejoined the group from America. Matt and Delaney are self explanatory, when they aren’t suiting up it’s 40 odd points you have to find from somewhere else.”
The Hoods take on Bradfrod Dragons at the Nottingtham Wildcats Arena on Saturday at 6.30pm. Full details are available on our new FGame Day page where you can buy tickets, download the matchday programme or follow live online.

The new look Nottingham Hoods entered the 21/22 season with a new roster, new aspirations, and a new ethos.

The Nottingham McDonald’s Hoods are delighted to announce the signing of Demetrius Houston for the 2019/20 season.