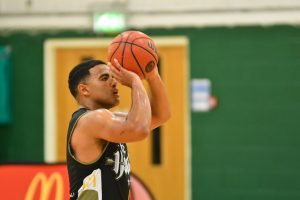 The win was the Hoods 150th in all competitions in their 10 year history, but they were made to work for it.

The scene was set for the Hoods 100th home game and with both teams on losing streaks and similarly placed in the league, this was a key game and it was Team Newcastle who started strongest following and early 3 from Powell to build up a 5 point lead midway through the quarter. The Hoods defence was working well but offensively they were struggling to get their shots to fall as Team Newcastle went on a 0-5 run to finish the quarter up 10-16, the lowest scoring quarter this season for the Hoods.

In the 2nd Quarter, the shooting woes continued for the Hoods with seemingly everything just rolling out of the rim, whereas Newcastle were starting to find some form, especially from beyond the arc. A technical foul sent Maher to the line for 1, but that was the only points for Hoods in 3 minutes as Newcastle stretched the lead to 10. A James lay-up brought it back to single figures, but another run by Newcastle and more missed shots from Hoods suddenly had them trailing by 15. A well timed 3 from Williams off the bench doubled the points tally for Hoods with just 3 minutes remaining. Another Newcastle 3 was finally answered with some tough work under the basket by Welle as he reeled off 4 straight points. A 3 at the end of the half and Team Newcastle had a 16 point lead and the Merry Men spectators with stunned, 24-40.

There was no halftime chat by Coach Westley as his players were sent straight back on to the court to shoot, but the beginning of the 3rd Quarter summed up the game for the Hoods so far with 5 attempts on the same play rolling off the front of the basket and refusing to go down. Finally, Wright made a great move to the basket for the lay-up and the first points of the half. The Hoods stepped up the intensity on defence to good effect, forcing turnovers but still the shots would not fall as Newcastle extended their lead to 18. With 6 minutes remaining, a 3 from Wright got the Merry Men into the game as they started to get behind their team. Ballentine, who was playing very well, then Powell then Mitchell hit shots and the deficit was 12. More turnovers by Newcastle, forced by the defensive pressure gave ignited the Hoods as the crowd got louder with every play. A Watts block was followed by a Powell steal and a Mitchell lay-up, before Watts and Maher hit back-to-back 3s with 3 minutes remaining to bring the deficit to single figures. A Watts steal led to another 3 from Maher and the crowd were going crazy. A block by Welle led to a chance on the buzzer for Maher which just fell short, but Hoods were back in the game, 48-56.

The 4th Quarter started exactly as the Hoods needed with a Mitchell steal and Nelson 2 – the deficit was just 6. As the noise and defensive intensity increased, another Welle block and a Nelson steal sent Watts and then Welle to the basket, the shots were falling, the deficit was 4, with 7 minutes remaining. The two teams traded baskets before a massive block from James forced another 24 second violation and Watts hit the 3 to bring the score to 59-60. A Mitchell lay-up from a great Powell feed soon followed and the Hoods had the lead for the first time since the 3rd minute. Newcastle hit straight back, but Mitchell was fouled and sunk his free throw to tie the game at 62. Two blocks in a row from Welle, a James and then Powell lay-up and the Hoods were up by 4. A Mitchell steal found Welle under the basket and the crowd were raising the roof. Newcastle were forced to foul and Powell finished the enthralling game off from the line as the Hoods ran out 72-64 winners.

David “TinTin” Watts commented after the game, “Massive thanks to all the Merry Men that supported us tonight. You guys were an important part of our comeback! Great job from the boys on the win.”

Basketball is back in Nottingham and our Merry Men of fans are welcome to join on Thursday 16th September at 8pm.