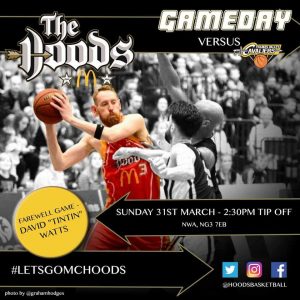 This weekend sees the regular season come to a close for the Nottingham McDonald’s Hoods as the play-offs start for the age group teams. It will also see Nottingham Legend David “Tin-tin” Watts sign-off on a glittering career at the Wildcats Arena NG3 7EB, on Sunday at 2.30pm.

The Hoods have finished the season in disappointing fashion, and are on a 6 game losing streak, but will be looking to end that at the weekend with a double-header of action.

It all starts on Saturday as they take on Team Newcastle, who will unfortunately be relegated next season. The two teams have met only once this season, with Hoods taking it 72-64 at home and a repeat of that would set up Sunday’s play-off final against Thames Valley Cavaliers perfectly.

Sunday’s game is sure to be a sell-out as Nottingham bids a fond farewell to one of the best players and role models to come out of the city. David “Tin-tin” Watts started his National League career with South Nottingham Academy in the year 2000 and has since picked up numerous titles and MVP awards in the UK and Europe as well as representing England. Looking back on his career Tin-tin says, “I have so many great memories, winning national titles, MVP awards etc. But the two that really stand out are the undefeated season with Reading Rockets and gaining promotion to NBL1 with my hometown Nottingham Hoods.”

The game itself should be a high-octane thriller between these two great rivals on the court and friends off it. With both teams earning promotion from Division 2 last season, Hoods winning the league and Cavaliers taking the play-offs, Cavaliers have adapted better to life in Divison 1, and have a secured a home play-off quarter final, whereas the Hoods have just missed out on the play-offs.

Elsewhere, Hoods u18 and Trent start their play-off campaigns as the season nears it conclusion.

This Friday, 11th July 2014, Club Captain, Bruce Lauder will be attempting to climb the 4 Highest Peaks in the UK within […]

The Nottingham McDonald’s Hoods are back on the road, travelling to last year’s beaten finalists Hemel Storm on Saturday.

A shortened weekend to forget for the Hoods, with only two of the men’s teams playing, both losing.