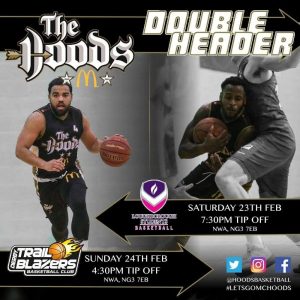 The Nottingham McDonald’s Hoods have a huge double header weekend as they take on local rivals Loughborough Riders and Derby Trailblazers in a full weekend of National League action.

With both teams sitting ahead of the Hoods in the league table, it promises to be a really tough test but local derbies typically bring the best out of the team. The action starts on Saturday with Riders the visitors. Riders are having an exceptional season, backing up their play-off title last year with a National Cup win and a National Trophy runner-up. They have comfortably won both previous meeting this season, but this is the first time they will meet in front of the Merry Men at the Wildcat Arena. Riders come off a mixed weekend though, defeating Cavaliers away from home by 3 points on Saturday, before losing to the same team by the same scoreline on their home court! Hoods on the other hand are on a 2 game winning streak since the last time these two met.

Attention then turns to Sunday and an afternoon game against Trailblazers. This time it is Hoods that have won both games, the last meeting being a shooting masterclass from behind the arc from the Hoods.  Again, both previous meetings were in Derby, but they are currently on a 4 game winning streak and confidence is high as they have moved up the league after a poor start and currently sit in 4th place and well in contention for a home play-off spot.

Hoods are still holding on to the 8th and final play-off position, but will be looking to pout some daylight between them and the rest of chasing pack, and what an opportunity this is to do that in front of their fans.

The Nottingham Hoods are delighted to announce the inclusion of a Junior Girls programme, starting on 8th September 2021.

Do you want to be the next hero of Nottingham Basketball? Then make sure you are at the Nottingham Wildcats Arena this […]