On 22nd September, 10 years of Hoods legends take to the court in aid of Alzheimer’s Society, and the starters have now been announced – it’s quite a line-up!

It all takes place at the Nottingham Wildcats Arena, Greenwood Rd, NG3 7EB on Sunday 22nd September, 12-3pm. As well as the game itself, there will be plenty of the usual Hoods entertainment, skills competitions, shootouts and plenty of food and cakes available. There will be dance displays from Nottingham Groups, Summers in Time and Signature Studios as well as Freestyle displays by some of the hottest talent in the world.

The game itself will feature 8 MVPs and some of the best talent to ever pull on a Hoods kit as we aim to raise as much money for Alzheimer’s Society, a cause very close to a lot of the players’ hearts. 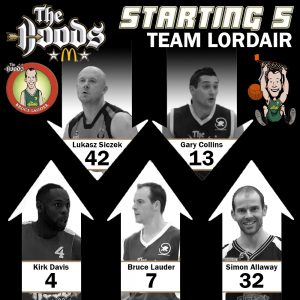 Team Lordair, captained by 2 time MVP Bruce “Lordair” Lauder will be coached by General Manager, Lee English. Bruce was an integral part of the 2010 National Championship winning side and still holds the record for most rebounds in a game with 22. Playing in the very first Hoods game, the 5 season veteran retired in 2014 when he was inducted into the Nottingham Basketball Hall of Fame and his shirt number, 7, was retired. Since retiring, Bruce still works behind the scenes with the Hoods.

Lining up with Bruce are two other founding members of the Hoods, Kirk Davis and Gary Collins. Kirk started the very first Hoods game and brought countless highlights during his 7 years with the Hoods. Known for his flying dunks, Kirk is the Hoods most capped player and was the poster boy for the Hoods when we started our partnership with McDonald’s. Gary Collins is a 2 year Hoods veteran and another key player during the Championship wining side of 2010, earning him MVP honours in 2011. A constant threat on court, Gary’s bank shot is unstoppable. Rounding off the starters for Team Lordair are two more MVPs, Simon Allaway, who won the award in 2012, and Lucasz Siczek winning the award in 2014 – mid-way through his 5 year tenure at the club. Both players were prolific scorers during their time at the club and have been key part of the club’s development. 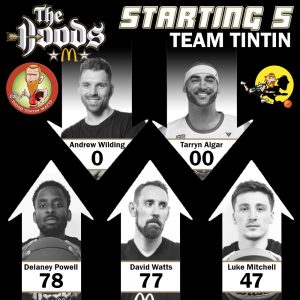 Team Tintin, captained by Nottingham Legend, David “Tintin” Watts will be coached by Head Coach Ryan Westley. David, has numerous national and international accolades and is one of the best basketball talents to ever come out of Nottingham. Joining in 2016, he played 3 seasons with the Hoods and was crucial in the Division 2 League Title side in 2018, earning Hoods promotion to Division 1. When retiring at the end of last season his number, 33, was also retired.

David is joined by two other integral parts of the the Division 2 Title winning side, MVPSs Luke Mitchell and Delaney Powell. Luke, MVP in 2018, joined the club at a very young age in 2012 and made an immediate impact, returning full time to the team in 2015. Luke holds the record for most assists in a game with 10 and since Delaney joined in 2016, the two have been an unstoppable force on court. Delaney is a two time MVP and one of the most potent scorers the Hoods have seen, holding the record for most points in a game with 40. Alongside the three Division 2 champions, are two incredible freestyling talents – Andrew Wilding and Tarryn Algar. As well as being exceptional players, their skills with basketballs are second to none and they will be putting on plenty of routines throughout the day including a dunk display at the end of the 3rd Quarter.

Tickets for the event are priced at £5 for adults, £3 for children and all activities on the day cost £1 with all the money raised going to Alzheimer’s Society. If you are unable to make the event, but would still like to donate to this worthy cause, you can using the justgiving link below:-

With both the Senior Men and Trent Hoods having a well deserved weekend off, attention falls to the u18 National Cup 4th […]

The Basketball England Senior League structure was announced today and confirmed, the Nottingham Hoods will be playing Division 1 basketball for the […]